How Do Air Curtains Work? All You Need To Know

Fan-powered air curtains are used to keep contaminants from traveling between different parts of a building. Air curtains use a downward draft to separate spaces within a building or between the inside and outside without confining or limiting people’s ability to move about freely.

What Does an Air Curtain Do?

This type of curtain uses a fan to move an air stream downward. Temperatures can be controlled by keeping hot or cold air from entering an open area through an invisible barrier created by a system of forced air. Insects, dust, pollen, and other contaminants are also kept out of interior spaces by using air curtains.

As an alternative to standard doors, air curtains are an excellent choice. They prevent pollutants and other environmental elements from entering a location while allowing people to easily move between them. 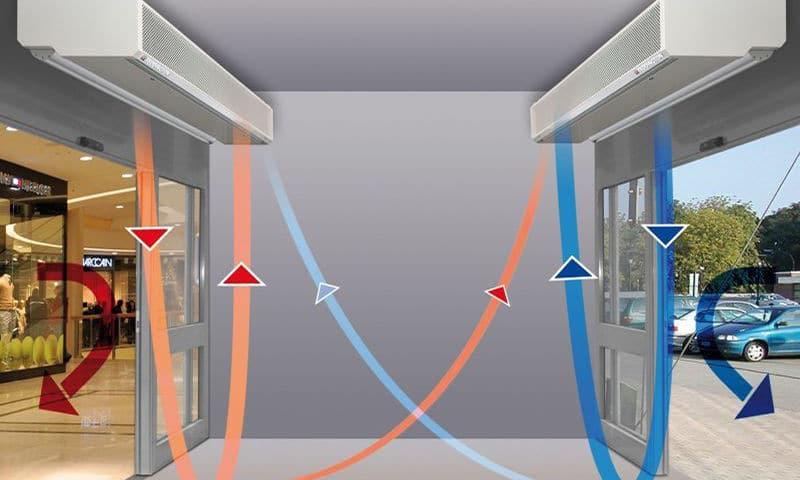 How Do Air Curtains Work?

Because of the downward air flow, there is less air flow between the two rooms. Ideally, the curtain’s airflow should be strong enough to force any potential contaminants down and away from the opening it is designed to cover.

Controlling the temperature and circulation between two places has never been easier than with air curtains. A wide range of applications can benefit from their adaptability and reliability.

As customers enter and exit a restaurant, air curtains can help alleviate the discomfort caused by drafty doors. Additionally, an air curtain can save money on heating and cooling expenditures by minimizing the heat and cooling losses that occur when a door is opened and then closed.

It can be difficult to keep huge commercial retail malls at a comfortable temperature. No matter how cold or hot it is outside, an air curtain at the entrance to a commercial establishment keeps customers and employees alike comfortable.

Kitchens and Walk-In Freezers or Coolers

Every time the door of a walk-in freezer or cooler is opened, a device known as an air curtain stops the cold air within from leaking out. Insects and other pathogens are also kept out of these crucial food storage spaces. In addition to saving money on energy, preventing the loss of cold air from these units can have a favorable effect on maintenance by reducing the time it takes the unit to recover after opening the door. 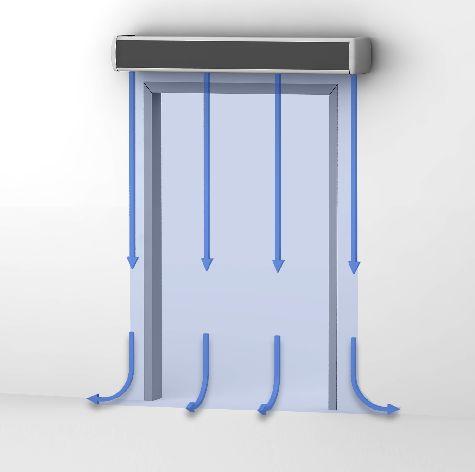 Certain areas in auto body shops, such as those used for detailing or painting, must be kept dust-free. Air curtains prevent airborne pollutants from entering the paint booth from the shop area.

A warehouse’s shipping and receiving sections are frequently exposed to the outdoors, and there is always a steady stream of people coming and going. With air curtains installed over dock doors and other open areas in a warehouse, heating and air-conditioning systems can be significantly reduced in their duty.

A hospital or care facility’s sensitive areas are protected from outside pollution by air curtains, which keep patients and staff both comfortable and safe. Doorways leading to important locations, such as intensive care units or surgical suites, can be kept free of germs and viruses thanks to the airflow from the air curtain.

Installed inside the entryway, the air curtain directs airflow downward and outward at times.

An air curtain can be used in two ways. If you place it in an open doorway, a continuous stream of air will flow through it. This sort of air curtain is commonly used in large-scale warehouses and big-box stores. Another option is to place the air curtain behind a closed door and only activate it when the door is opened. As soon as the door is closed again, it goes into air blast mode.

In both circumstances, the curtain is installed on the side of the entryway that is heated or air-conditioned, and it covers the whole length of the doorway. You may either have it pull in conditioned air straight down or slanted a little outward to force out any outside air that could otherwise enter via the entryway.

An electric heater can be added to an air curtain to increase its effectiveness. Imagine entering a facility on a frigid winter day and being greeted with a rush of warm air. In addition, because hot air tends to collect in the rafters, an air curtain is useful for re-circulating it. There is enough force in the air to keep insects, dust, and other pollutants at bay [source: AirDistributors.com]. In reality, air curtains are sometimes used in sterile environments to prevent the entry of airborne contaminants. Open stoves and refrigerators can also be protected with curtains.

The Physics of Air Curtains

Imagine a head-on collision between two balls being rolled at each other. A simple physics rule dictates which way a ball will roll after impact: “force equals mass times velocity (squared).” In other words, a little ball moving quickly can overcome a huge ball moving slowly in a collision.

The air curtain operates on the same principle. If the curtain’s airflow is to have any effect, it must be able to overcome and redirect the outside air’s force. In order to keep strong winds at bay, you’ll need an air curtain that is powerful enough to blow a lot of air at high speed.

It’s also important to consider the velocity’s direction. For horizontal winds, one might imagine that an air curtain would be the most effective weapon against them. However, this isn’t truly true. Much of the power in the air is lost as it is blown out the door for a head-on collision with other air (like those two balls we mentioned earlier). Instead, air curtains divert the majority of their flow of air toward the floor of the doorway, rather than toward the ceiling. Air must be blown hard enough to maintain a sufficient velocity as it enters and exits the doorway, and to outpace the inrushing air outside. As a result, the curtain works as a barrier against which air from the outside is drawn and then reflected.

When wind is blowing at 13.6 miles per hour (21.2 kph) horizontally toward the door, an air curtain set at a 15-degree angle must blow 133 feet per second (91 miles per hour/146.4 kilometers per hour) to oppose the power of the outside air.

In order to effectively offset the power of the incoming air, you’ll need to experiment with your air curtain’s speed and angle settings. If you want to fine-tune the performance of your air curtain, you have three options: increase the volume, speed, or angle at which the air is pushed [source: PoweredAire.com].

The Cost/Benefit of Air Curtains

There are a slew of factors influencing the air curtain cost-benefit analysis, much like with other economic issues. Air curtains as small as 36 inches (91.4 centimeters) can be found for under $200 [source: Amazon]. If you’re in the market for a high-speed, heated curtain, you can expect to pay around $450 [source:Grainger.com] for a 9’x14′ (2.7mx4.2m) door size. The first secret in air curtain economics is to just pay for what you need, just like tilting and powering your air curtain to do what’s needed. Choosing the right size should be a cinch: Take a look at the dimensions of your door. The next step is to assess whether you’re looking for efficiency or comfort – if comfort is more important, consider a heated model; if not, an unheated model would be a better option. And lastly, determine how much pressure your air curtain will require to keep out outside air. You’ll need more air moving faster in a region with a milder climate and less wind to combat a Minnesota winter, for example.

The wind speed and energy costs must be taken into account if you want to know your long-term energy savings. In order to determine the long-term financial benefits and expenses of installing an air curtain, manufacturers Berner International and Mars Air Systems provide online calculators on their websites. It will pay for itself in less than a year if a $3,000 air door is built on a doorway of 8 feet by 6 feet (2.4 meters by 1.8 meters) with an average temperature of 50 degrees Fahrenheit (10 degrees Celsius) and a wind speed of 8 mph (12.8 kilometers per hour). 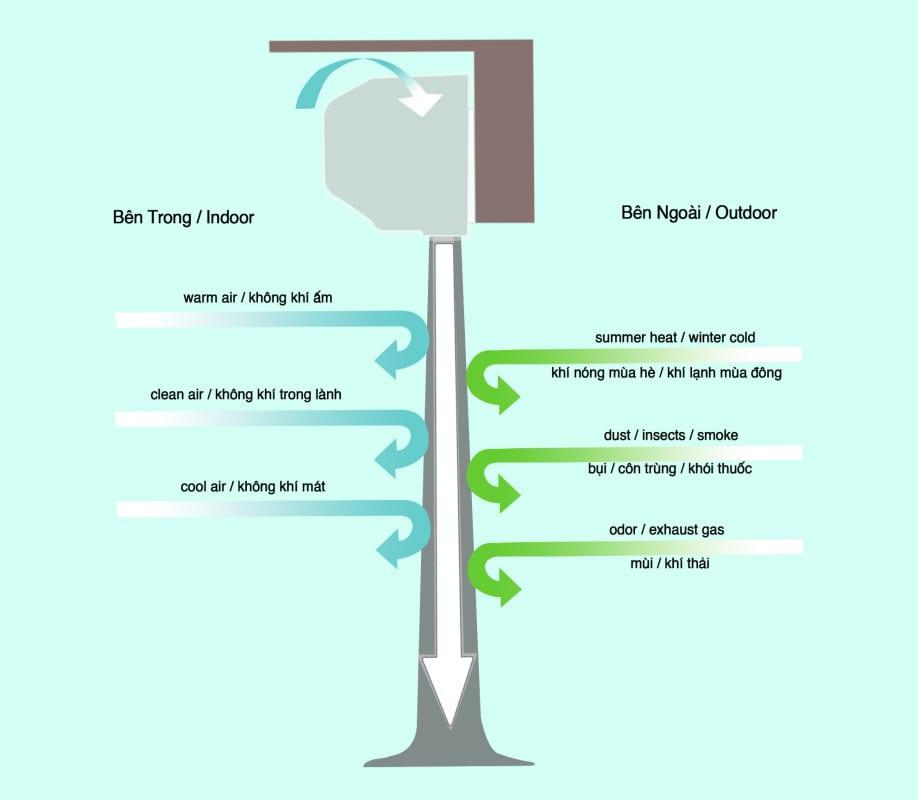 Before writing this post, I had never heard of an air curtain. Since becoming more aware, I’ve noticed them all over the place. In the neighborhood grocery, “Oh, is that what that burst of hot air is?” I believe so, at least. A third can be found in the dental clinic. As it turns out, there’s been an unseen revolution in the technology of entry gaskets taking place all around us. Or you’ll be left in the cold, ineffective dust if you don’t get involved in the uprising.

A good approach to separate two spaces is with air curtains. For many applications, they act as an almost impenetrable barrier, limiting the loss of heat and cooling as well as the movement of pollutants. The best air curtains may be found at ABC Docks, LLC, where we specialize in finding the right solution for your application. Contact us today to learn more about air curtains or to get a free estimate. 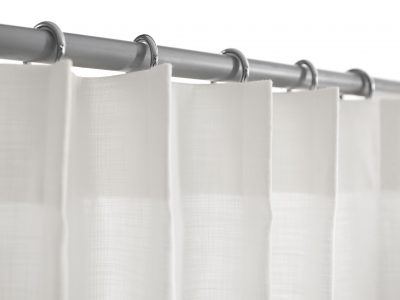 How To Measure Yardage For Curtains? Step-by-Step Tutorial 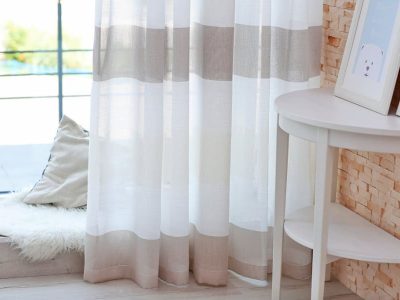 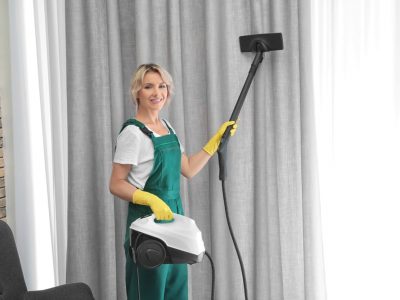 How Much Does It Cost To Dry Clean Curtains? Everything To Know! 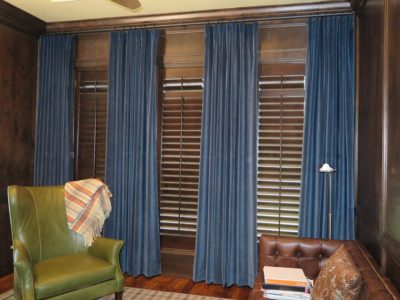 How Much Does A Curtain Cost? Everything To Know! 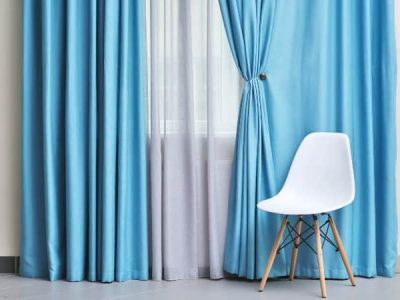 How Many Yards Of Fabric To Make Curtains? A Must Read! 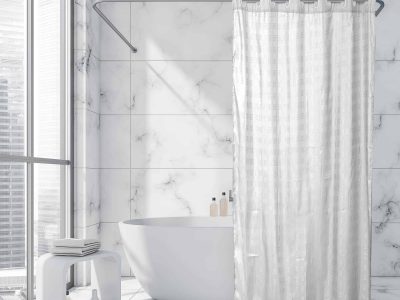 How Long Are Shower Curtains? Perfect Information For You 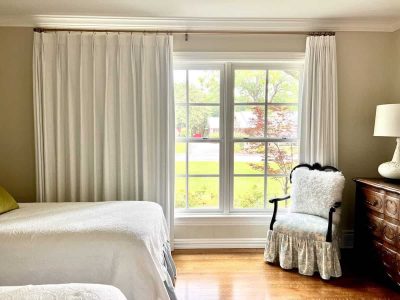 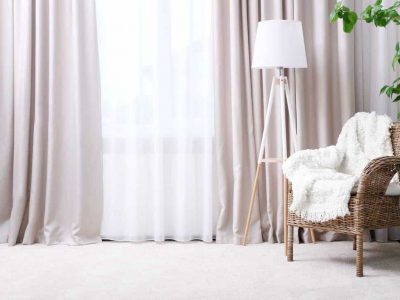 How Close To The Floor Should Curtains Hang? All You Need To Know 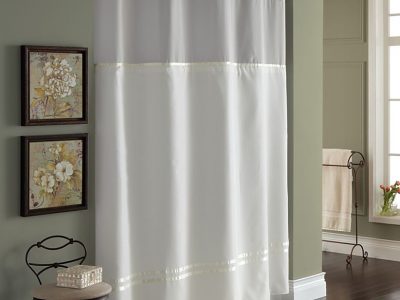 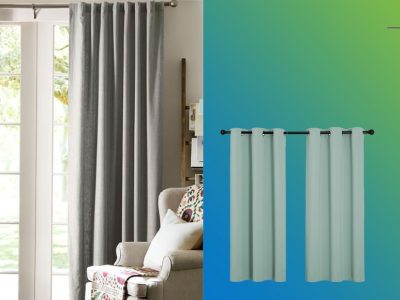 How To Measure Yardage For Curtains? Step-by-Step Tutorial

How Much Does It Cost To Dry Clean Curtains? Everything To Know!

How Much Does A Curtain Cost? Everything To Know!

How Many Yards Of Fabric To Make Curtains? A Must Read!

How Long Are Shower Curtains? Perfect Information For You

How Close To The Floor Should Curtains Hang? All You Need To Know