It is possible to propagate an orchid by dividing it into two or more sections. Using tree bark as potting material simulates the natural environment of orchids as epiphytes, which grow on the trunks and branches of trees. Most orchids are divided by cutting the pseudobulbs (or inflated stems) that grow from the horizontal stem in the middle of the roots, rather than the stem itself. Dendrobiums, which can grow in USDA zones 9 to 11, have pseudobulbs that can be split, unlike Phalaenopsis orchids, which may grow in USDA zones 10 and 11, necessitate cutting their stems.

How to Split Orchids

Prior to the spring growth phase, use a sterilized knife or razor blade to cut through the root system. Allow three leafy pseudobulbs and one dormant bud in each section at the very least. Next year’s budding and flowering will be healthy as a result of this. If you have a Phaelanopsis or any monopodial orchid with a single stem, cut the stem just below a node (a tiny, fleshy bump) with healthy roots. 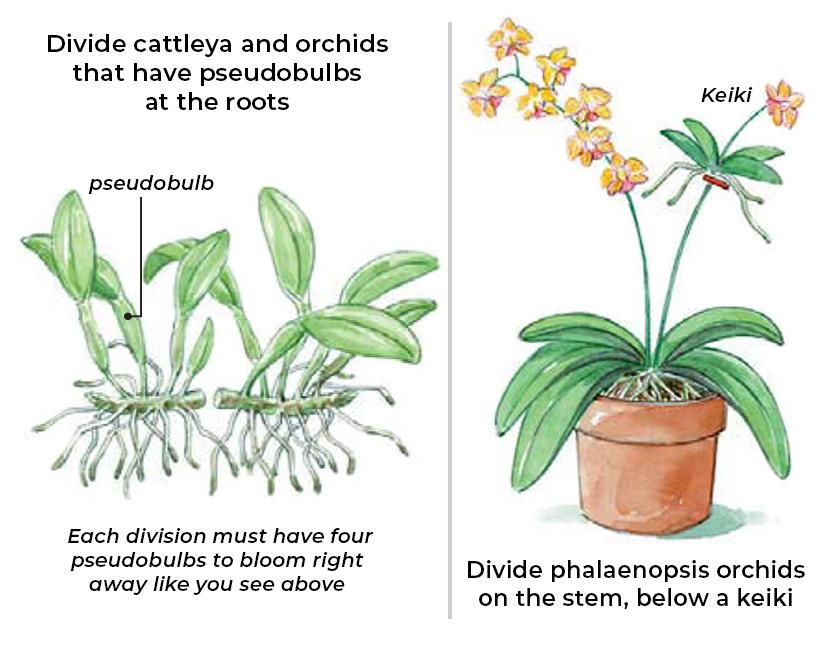 Toss out pseudobulbs with no “live eye” or dormant bud that have no leaves.

If your orchid is old and has formed a new pseudobulb, cut the fresh pseudobulb from the backbulb, which is the old, dormant pseudobulb. A young pseudobulb can put a lot of stress on an older orchid, so it’s best to wait until it has at least two backbulbs before removing it.

Use boiling water to sterilize and moisten your potting materials, such as fir tree bark chips and sphagnum moss, in a container without a bottom hole. Drain the materials and then transfer them to the orchid pots after they have cooled.

Set up a separate pot for every single newly sprouted pseudobulb with a live eye. Use tree bark or any other well-drained material to separate the backbulbs and plant them in their own pots.

In order to enhance humidity, mist newly potted pseudobulbs, backbulbs, and orchids twice a day. In three to four months, you should notice new development from the backbulbs, at which point they will require new potting material. Depending on how many pseudobulbs you retained each area, the next year or several years should see fresh flowers develop from the other bulbs.

What Type of Orchid Do I Have? 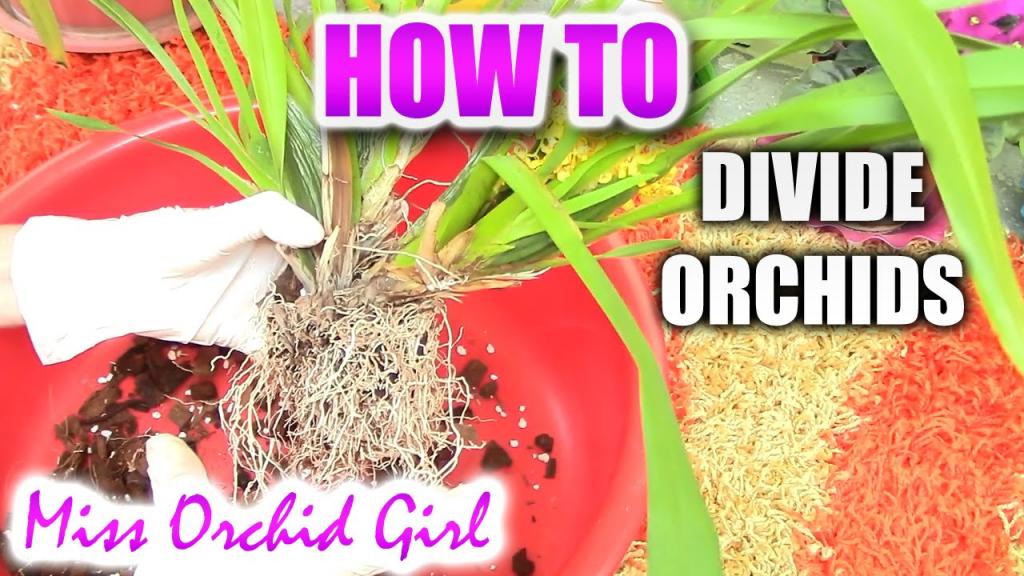 Why Repot or Divide Orchids?

There are numerous explanations for this. There is a chance it has outgrown the container. Alternatively, over watering or fertilization may have harmed the root system. Fir bark mixtures are the most frequent potting soil for orchids. After a year or two of watering and fertilizing, these combinations will degrade and will need to be renewed. Degrading fir bark combinations become darker and more porous, and they may emit a musty or rotting smell. The fragile roots of orchids can be damaged by this degraded combination. Root systems can potentially be damaged by the buildup of fertilizer salts in the potting mix. All plants, at some point, will need to be removed from their current potting material and given a fresh start.

When Should You Repot Your Orchids?

After the flowers have faded, re-potting most orchids is the best option. Re-potting many orchids at this time will benefit from new growth. Phalaenopsis, for example, is a typical orchid that blooms in the dead of winter and then regrows in the spring and summer. After the orchids have finished blooming in the spring, it is time to repot and divide them. Repotting your orchids every three years is recommended as a best practice.

When you buy an orchid, check the potting medium. A year or two is about the average shelf life for a fir bark blend. Sphagnum moss is sometimes used to package some orchids for sale. Even though it’s a great medium for orchids that require a lot of moisture, it might be difficult for those just getting started with the hobby. When watering Sphagnum moss, avoid over-watering the outside borders, as the moss tends to dry up. Re-potting the orchid in a more convenient media may be beneficial.

When Should You Avoid Repotting Orchids?

When your orchids are in bud or blossoming, you should avoid re-potting them. Too much of the plant’s resources are being invested in the bloom. This can cause the buds to fall off and limit the life of the flowers.

When working with orchids, it is necessary to use clean instruments and sanitary hands to prevent the spread of plant viruses. Use latex gloves or frequently wash your hands when working with different orchids. Use newspaper to separate your orchids and re-pot them in layers. This will make it easier to clear up the trash from one plant before moving on to the next. Clean equipment with rubbing or isopropyl alcohol, or a 10% bleach solution (1 part bleach to 9 parts water) (70 percent straight from the bottle). You should soak for at least ten minutes. To cut roots and divide orchids, use a disposable utility razor blade, which can be found at any hardware shop. The 10% bleach solution can be used to disinfect pots. 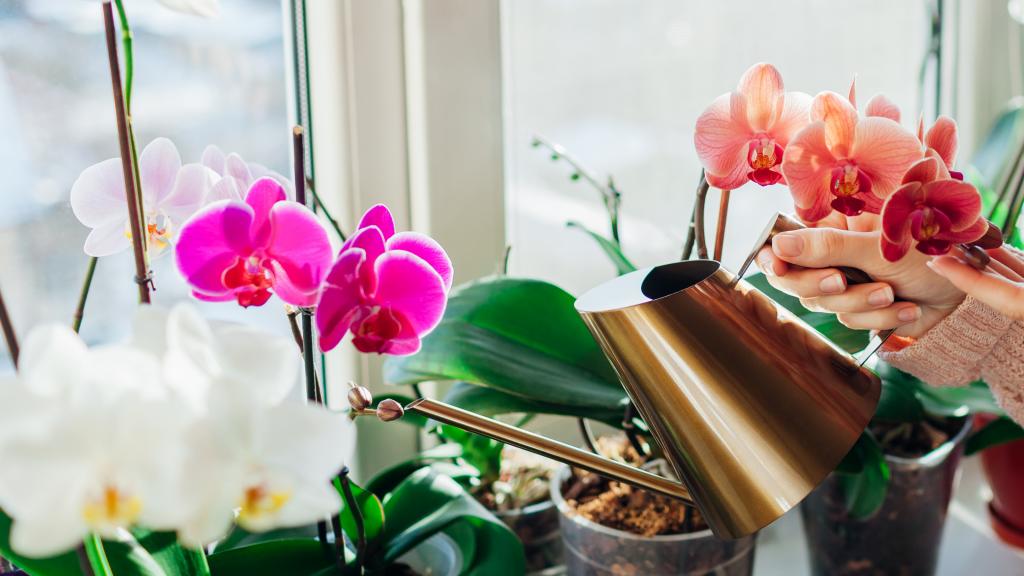 Steps for repotting and dividing orchids: