Known as million bells, Calibrachoa is a popular choice for container gardening. Million Bells® and Super Bells® are registered trademarks in the industry, despite the fact that they are generally referred to as “million bells.” Many different varieties are available, including single- and double-blooming varieties. Flowering Calibrachoa develops 1-inch-wide flowers that look like little petunias. The round, slightly sticky leaves have a compact form. 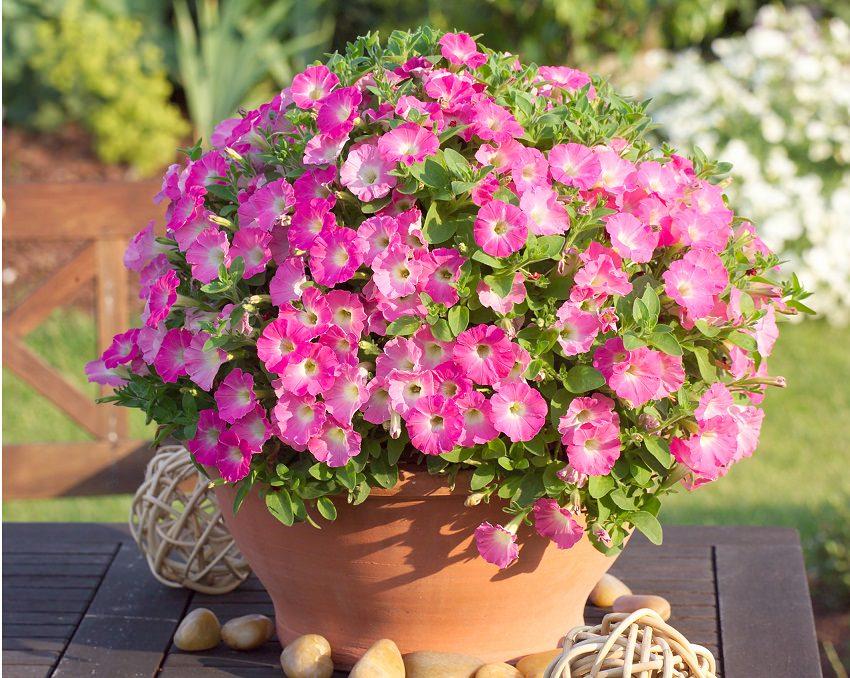 Million bells is best planted or re-potted in the spring in most regions. Its blossoms attract butterflies and hummingbirds throughout the growing season until the first frost. As a “spiller” in a container, it’s likewise a fast grower and reaches toward the ground in a matter of weeks. It looks fantastic in hanging baskets, bowls, and other mixed containers because of its trailing behavior. It can also be used as a ground cover or a border plant.

One of the most common names for Calibrachoa is “Million Bells” or “Trailing Petunio,” which refers to the plant’s small, trailing branches and flowers in a wide range of colors, including violet, blue, pink; scarlet; magenta; yellow; bronze; and white. Developed in the early 1990s, all Calibrachoa cultivars are crosses with the original South American species. In full bloom from April to the first frost, they are a show stopper. Typically planted as an annual in colder climes or a perennial in warmer ones, the plant is hardy in USDA Zones 9-11.

It is a perennial in warm climates, although most people plant it as an annual because it is so short-lived. Paying attention to its demands will ensure that the plant blooms from spring through October. Despite the fact that it can be planted in the ground, the plant performs considerably better in a pot.

Even though it’s called a “self-cleaning” plant, which means it doesn’t necessitate deadheading to maintain blooming, it will benefit from a serious pruning and fertilization near the end of summer. Although Calibrachoa isn’t considered deer-resistant, it doesn’t appear to be a big draw for deer.

Although it prefers at least six hours of direct sunlight every day, the plant can withstand some partial shade, which is especially important in hotter climates where plants that receive some shade have a better chance of surviving the summer heat. A lack of sunlight might cause a plant to flower less frequently.

A well-drained pot is essential for successful cultivation of Calibrachoa. If you’re planting in a garden bed, make sure the soil is rich and well-drained. For a healthy root system, mulch is a good option.

Calibrachoa should be well-watered, but not drowned, at all times. After the top inch or so of soil has dried up, only then should water be added. Your finger should go all the way down to your second knuckle in order to tell if your plant needs water. If the soil feels dry to the touch, water it thoroughly until it drains out of the bottom of the pot. Wait to re-water until the earth has dried out completely. 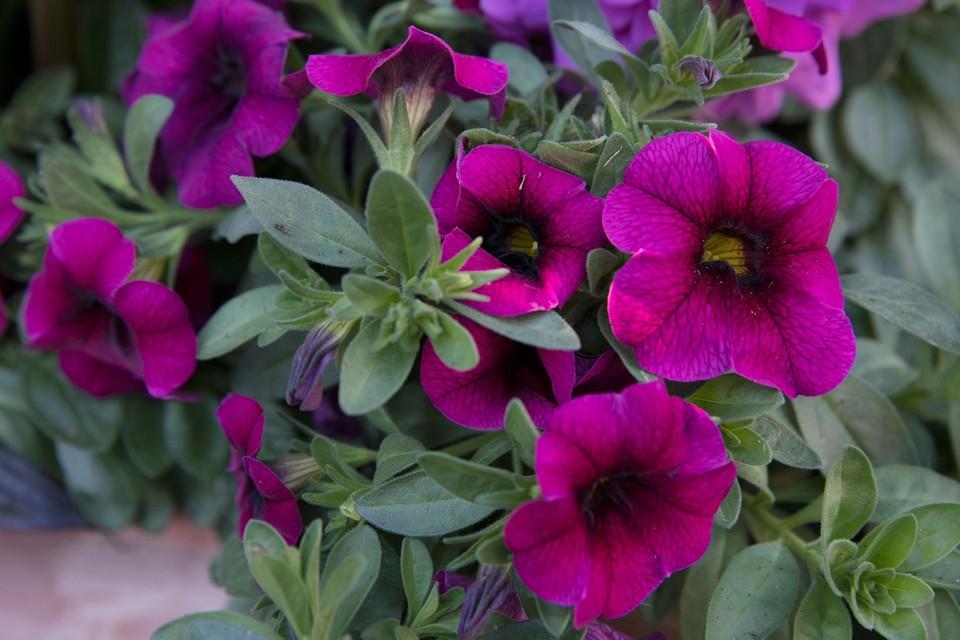 Soil can dry out quickly due to high temperatures, wind, and low humidity. You may need to water twice a day, depending on your situation. If you’re not familiar with your plant’s watering requirements, check the soil periodically at the beginning of the season. As the summer heats up, so may the watering requirements, so be vigilant. Overwatering the plant can lead to root rot, so use caution.

To achieve the greatest flowers, avoid letting the plant dry out over and over again, especially in the winter. Temperatures between 55 and 65 degrees Fahrenheit are ideal for this kind. In the spring, you can move a hardened-off plant outside where it can take a light frost. Alternatively, hot and dry weather can be taxing on plants. Spritzing wilted foliage regularly with water will help bring it back to life, but be cautious not to spritz in direct sunlight, as this might burn the leaves.

A slow-release fertilizer at planting or a diluted liquid fertilizer on a regular basis can be used to feed this heavy feeder. Once the plant is established in its pot, you may add an organic, slow-release fertilizer and give it water every two or three weeks throughout the season. In order to encourage late blooms, feeding is especially important at the end of the season. Follow the instructions on the plant food packaging carefully to avoid over-fertilizing. A plant’s leaves becoming yellow or green indicates that it needs fertilizer or more sunlight.

The Calibrachoa genus has a total of 28 species, although the ones commonly grown in gardens are complex hybrids created by crossing diverse species. Calibrachoa comes in a dazzling display of hues, with dozens of different types.

A garden’s worth of Calibrachoa plants are hybrids that yield a small number of seeds. Vegetative propagation is also forbidden because many of the hybrid kinds have been patented. If you’re going to use cuttings to propagate, the following is how it works:

When you purchase a million bells plant, it is almost always severely root-bound, with so little soil remaining in the pot as to be unusable. This implies that you have very little room for mistake when it comes to watering, and the plants have very little to work with. A slow-release fertilizer should be added to the potting mix if you’re moving the plant from its original container. There will be no more repotting needed for these short-lived plants. You may grow these spiller plants in any kind of container, as long as it has a lot of drainage holes.

Aphids are very vulnerable to Calibrachoa plants. Spray the plant with water, a mixture of water and dish detergent, or neem oil to get rid of the aphids. 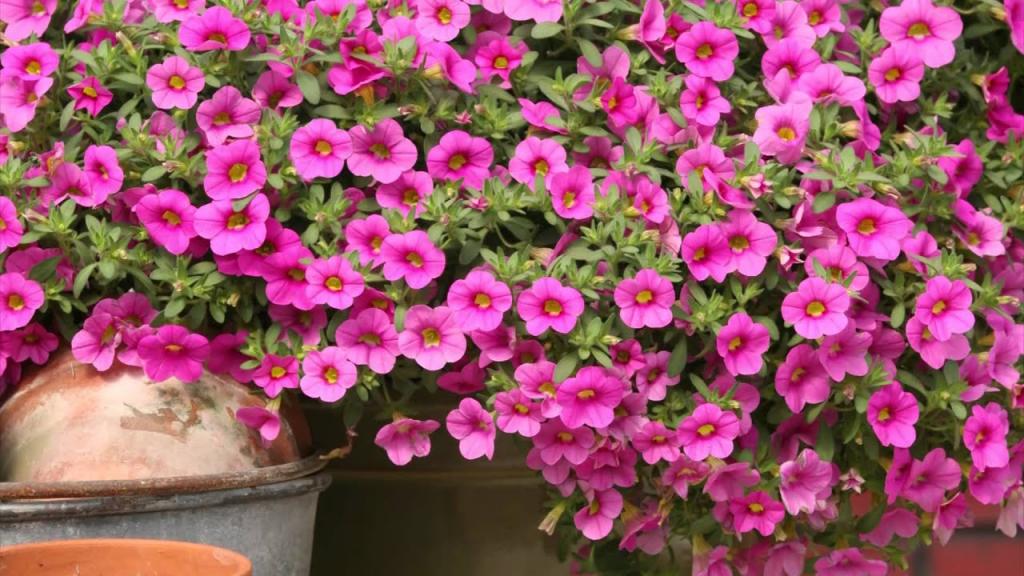 Yellowing leaves, rather than aphids, is the most common issue with Calibrachoa, despite the plant’s usually easygoing nature. Yellowing leaves can be caused by a variety of factors, including:

If these plants are overwatered, root rot or mold infection can occur. Root rot can cause plants to droop after being watered. Good air circulation, water management, and soil porosity are essential to preventing these problems.

Are million bells easy to care for?

The needs of the million bells plant are straightforward: it needs sunlight, water, and nourishment to survive. Look out for an aphid invasion.

How fast do million bells grow?

The trailing blossoms of this plant can quickly fill a pot.

What’s the difference between million bells and petunias?

The trailing, spreading, and mounding characteristics of million bells and petunias are so similar that they are frequently confused. Million bells, on the other hand, have smaller blossoms and are easier to maintain than petunias.